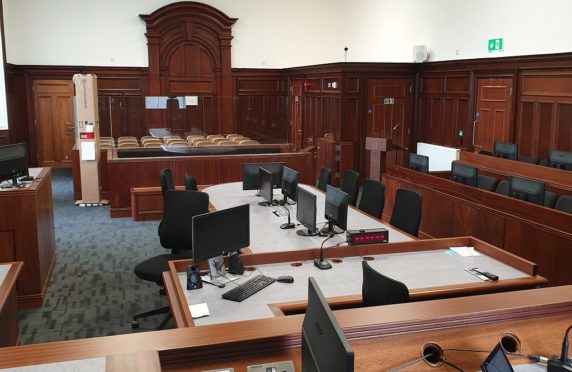 Criminal trials are unlikely to resume before the end of the year in Tayside and Fife after court bosses admitted they had yet to settle on venues for use as remote jury centres.

The backlog of cases is nearing 4,000 after court business was disrupted by the coronavirus pandemic.

Cinemas are currently being used to accommodate juries to serve the sheriffdoms of Glasgow and Strathkelvin and Lothian and Borders.

The Scottish Courts and Tribunals Service (SCTS) says it is planning for the four other sheriffdoms – Tayside, Central and Fife; Grampian, Highland and Islands; North Strathclyde and South Strathclyde, Dumfries and Galloway – to restart sheriff and jury business as soon as possible.

However, The Courier has learned it has yet to conclude contracts with any local venues to make that happen.

At present 3,675 summary trials – those held in the presence of a sheriff – and 157 solemn trials, which require a sheriff and jury, are classesd as “scheduled” in Tayside, Central and Fife. These involve complaints or indictments that have a trial diet assigned but have yet to call in court.

Odeon cinemas are being used as remote jury centres serving Edinburgh and Glasgow.

The SCTS said it was considering a number of options in Tayside and Fife.

A spokesperson said: “We can confirm that to support the restart of sheriff and jury cases, work is being done to identify and assess suitable facilities in each sheriffdom and we will confirm those locations as soon as we can.

“A range of venues are being considered with suitable facilities to support remote jury centres in each sheriffdom.”

Fife solicitor Krista Johnston, from Martin Johnston & Socha Solicitors and Criminal Defence Lawyers, said: “We are all anxious to begin to address the backlog of trials. Sheriff and jury trials deal with more serious crime and awaiting trial is a difficult time for both accused and witnesses.

“We are delighted that these cases can begin to be dealt with in Lothian and Borders and Glasgow, and we hope that other jurisdictions will quickly follow.”

Across Scotland as a whole, 17,818 summary cases and 497 solemn cases are currently scheduled.

Business is being pencilled in provisionally for February in many areas.

Alexander Stewart, Conservative MSP for Mid-Scotland and Fife has called for an end  to the “pain and trauma” caused by delays.

“Inevitably, we have seen the enforced shutdown of our courts significantly reducing the number of trials that can be seen,” he said. “However, it is important to note that whilst courts were forced to shut down due to the pandemic, 80% of the delays had already occurred.”

He added: “Far too many victims are having to wait too long for their day in court, which is causing many of them additional pain and trauma.”

Liam Kerr, Scottish Conservative justice spokesman and MSP for North East Scotland, said: “There are now thousands of victims of crime in limbo, waiting to have their day in court, which is unacceptable.

“It is imperative the courts are able to use alternative venues, digital solutions and extend their hours, without further delay.”

Efforts to alleviate the burden on courts have been stepped up this week after a practice note was published by Lord Carloway to establish new early, physically distanced, meetings between the prosecution and the defence outwith the courtroom, before a trial date is confirmed.

Currently, many summary sheriff court cases resolve on the day of trial when a guilty plea is agreed between the prosecutor and the defence.

This can mean witnesses and complainers attend unnecessarily when the slot in the court programme could have been used to allow another case to proceed to trial.

The new pre-intermediate diet meetings (PIDM) are aimed at ensuring only those cases which cannot be resolved by agreement, and which are ready for trial, will advance to a date.

VIDEO: Fife farmer vows to turn up at fly-tippers’ door with a lorry load of dung