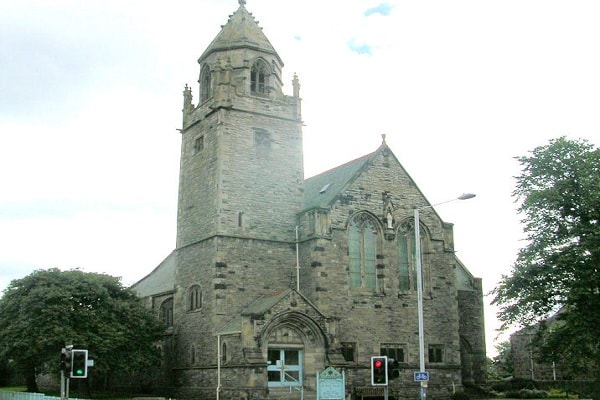 The building is of rubble bound stone, ashlar copings, and a slate roof. It is rectangular, long and narrow, with its main entrance in the western elevation, which is a slender gable. The door is set back in an ashlar porch, and the original door has been replaced with modern double-glazed door and windows at either side. Modern lanterns replace earlier ones on the wall at both sides of the porch. Above the porch is a lancet window with modern tri-partite fenestration which appears to be double glazed with a wooden frame. The apex of the gable originally supported a small stone cross, now removed. To the right of the gable an arched doorway between church and neighbouring house is without its original door. Stonework at the apex is similar to that on main gable, possibly once supporting a cross or other finial. The northern elevation was probably originally six bays, though original windows are hidden beneath modern replacements of different form. Conversion in 1975 made two two-storey houses, with modern square and rectangular windows on the northern elevation with cement surrounds. There are certainly two windows on the ground floor, others are hidden from view behind modern gates. The first floor consists of five windows randomly spaced, while in the centre two of the original lancet windows are visible, now blocked. To the right of the centre are three modern velux style windows at the bottom of the roof.