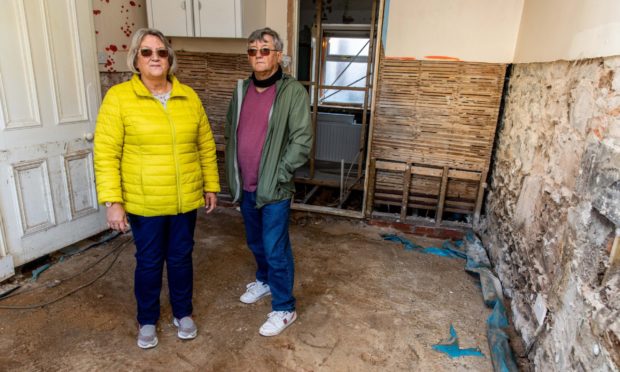 Fife residents hit by catastrophic flooding were left to fend for themselves as water levels rose.

The local authority has conceded its response to the effects of August’s “apocalyptic” storm was inadequate, with one councillor giving it a “D-minus” for its efforts.

Despite 129 council staff working through the night while up to their knees in water on the night of August 12, many people decanted from their homes did not know what to do.

A local community centre was not opened for evacuated families in one area and no information was made available.

A full record of every flooding event that night has still not been compiled and residents are still waiting for reassurance that they will not suffer the same plight again.

Councillors have now called for a full list of the areas affected to be made available.

They have also asked for a comprehensive report on the council’s response to the incident and the lessons learned, as well as an examination of whether any additional money could be found to prevent a repeat of the devastation.

What’s missing is how we deal with people having catastrophes on their doorstep.”

Police declared a major incident in Fife due to the unprecedented nature of the relentless torrential downpour along with thunder and lightning.

The amount of rain that fell at Fife Airport in Glenrothes has been described as a one in 1,000 year event.

Council officers have now pledged to spend £325,000 on reviewing road drainage and clearing gullies and ditches in a bid to ensure vulnerable communities are better protected during any future deluge.

Senior roads manager Derek Crowe said it was one of the worst and most intense storms ever recorded and the council responded to 239 separate incidents.

“We have many preparatory and mitigating steps and all were applied on this occasion.

“It really didn’t have any great impact, the storm was just so serious.”

Cardenden Labour councillor Linda Erskine was scathing in her response, however.

“We are prepared? Seriously? No-one in Cardenden believes that,” she said.

“Our response to this was not good enough. If it was a report card it would be getting a D-minus. We were lucky we didn’t lose lives in Cardenden.”

“It was identified that there was a gap, that residents were left to look after things themselves.”

Labour Dunfermline member Helen Law said the intention had been good but added: “What’s missing is how we deal with people having catastrophes on their doorstep.

“We urgently need to set up an emergency plan in Fife.

“We need a point of contact where people can go for information and where our staff, out in horrendous conditions, can get some welfare relief.

“People should not be left at sixes and sevens.”

Mr Crowe said areas for improvement had already been identified.

“It was identified that there was a gap, that residents were left to look after things themselves,” he said.

“We will be looking at the Fife-wide response.”

The council’s Labour co-leader David Ross said the response had been inconsistent that a full review should look at every department involved, including transportation, housing and communities.

He added, however: “Resources are at the root of this. We have limited resources and we need to examine that.”

What has Fife Council agreed to do?

‘Lucky to be alive’: Calls to make Fife road safer after three-year-old struck by car