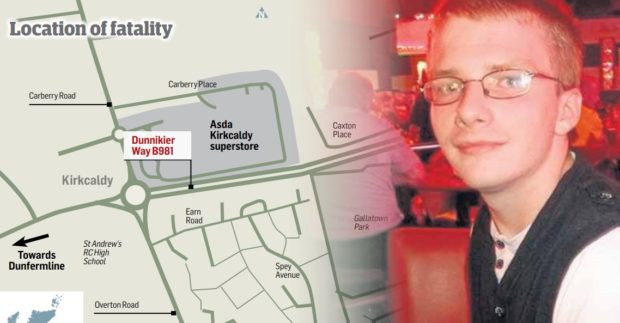 
A driver who killed a pensioner while on the phone and at the wheel of a faulty car has been jailed for three years.

William Gall crashed into Thomas Beall shortly after the frail 81-year-old had left a Kirkcaldy supermarket on November 12 2018.

The headlights of the 24-year-old’s Ford Focus were not working and its battery had very low power.

However, pizza delivery driver Gall continued driving and eventually hit Thomas as he crossed the road in the town’s Dunnikier Way.

The pensioner died after suffering brain damage, as well as fractures to both legs and his pelvis.

Father-of-three Gall was yesterday sentenced at the High Court in Glasgow, having earlier admitted a charge of causing death by dangerous driving.

Lord Matthews told him: “You were well aware that the headlights were out.

“Your vehicle had bulbs not suitable for the car, which you had secured with cardboard.

“Your dashboard was not working, so you could not see how fast you were going.”

Gall, of Dunfermline, was also banned from the road for six and a half years.

A previous hearing was told Gall had agreed to give a friend a lift shortly before the fatal collision.

When they arrived, Gall had to charge his car’s battery using another man’s moped.

He drove to Kirkcaldy with two passengers before “several warning lamps” lit up on his dashboard.

He then called another friend while driving, putting the phone on loud speaker.

The car’s headlights soon went out, leading to warnings from other concerned motorists.

Gall told a passenger: “I know – I’ve got my sidelights on.”

Mr Beall, who used a walking aid, had just left a local Asda store and he was at a pelican crossing at around 8.30pm as Gall headed towards the area.

Gall again ignored another motorist’s concerns over his lack of lights.

One of his passengers suddenly spotted Mr Beall crossing the road.

Prosecutor Mark Mohammed said: “He shouted to Gall, ‘William, look up’ as he was looking at his dashboard and talking on his mobile phone.”

Gall slammed on the brakes, but hit Mr Beall, who was hurled into the air.

A man rushed to help and quizzed Gall on why he had no headlights on.

Gall claimed his battery was “knackered”.

Mr Beall was taken to hospital, but his injuries proved fatal.

Crash investigators later concluded that the Ford’s battery “was not capable of powering the vehicle”.

It had also been fitted with bulbs which were not designed to be used in that make of car.

And a lack of battery power meant the bulbs could not work properly.

Jim Keegan QC, defending, yesterday said: “The upshot is that he made a bad decision and continued driving a vehicle that should not have been on the road.”

After the accident, Asda worker Vicky Duffy said she had been joking with Mr Beall in the store shortly before his death.

She said: “I was probably the last person to talk to him, as I served him in Asda last night and watched him leave the store with a wee smile on his face, as we were joking and laughing when he left.”

Sergeant Ewan Pearce, of Fife’s Road Policing Unit, said: “Our condolences are with Mr Beall’s family at this very sad time, who have described him as a much loved brother and uncle.”