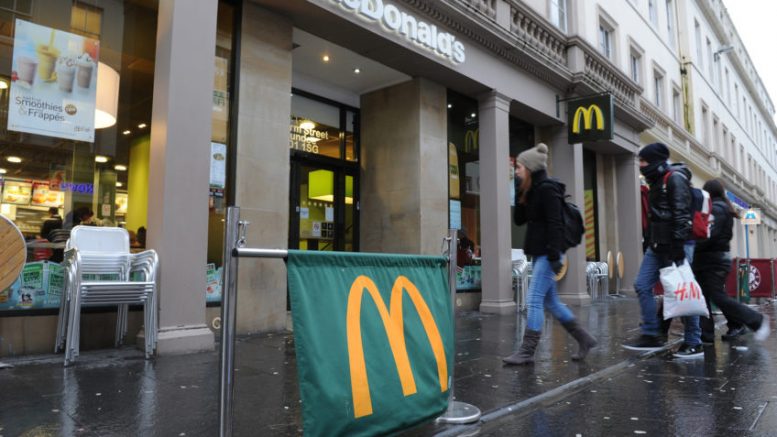 Scotland’s first McDonald’s opened in Dundee in the late 1980s. As the fast food chain marks its 80th anniversary, the former Reform Street branch manager recalls some of the outlet’s most famous visitors. Gayle Ritchie takes up the story…

As the very first person in Scotland to make and munch a Big Mac, Dave Jeffrey considers himself a lucky man.

Dave, now 59, was manager of the country’s first McDonald’s when it opened in November 1987 on Dundee’s Reform Street.

Over the decades, while enjoying his fill of the meaty treats, Dave has witnessed various famous faces enter the establishment – including Libertines singer Pete Doherty and kids’ TV star Andi Peters.

Dave was blown away by the reaction to the chain’s arrival in the city and recalls customers likening it to a “big spaceship” in the middle of Reform Street.

Its golden arches have since established themselves as one of the street’s most recognisable sights but at the time it opened, Dundonians weren’t quite sure what to make of it.

“The place went absolutely wild when we opened – we were stowed out,” says Dave.

“The restaurant was massively lit up inside and out and was a huge contrast to everything around it.

“It stayed open through the night, which people loved as the rest of the street was dark; there was no evening economy in those days.

“People had never seen anything like it. It was totally unique.”

“I remember being a wee bit disappointed they didn’t show up in their ice hockey gear!” says Dave.

“They just had on their civvies but they were great fun, and it was a nice link because they were American and understood the concept of McDonald’s.”

McDonald’s bosses even created a special whisky to celebrate the launch in Scotland.

Dave’s biggest claim to fame, he says, is being the very first person in Scotland to make and eat a Big Mac.

“Being a Scotsman, I was very proud to fulfil that role! And it’s great to be able to tell people about it!”

Dave recalls two celebrity visitors who made a lasting impression on the Reform Street diner.

The first, in September 2005, was pop star Pete Doherty, then the frontman of Babyshambles and dating model Kate Moss.

“Mr Doherty was in good form and seemed quite ‘happy’ as he enjoyed breakfast,” recalls Dave.

“A couple of our crew had some interaction with him.

“Not long afterwards, he was collared in the street by police for drinking in a no-alcohol area.”

Officers seized alcohol from Doherty and gave him a warning after the incident at 8.45am.

His spokesman said that the singer was “probably unaware” of Dundee’s city centre ban on drinking.

Babyshambles were due to play a sell-out gig at Fat Sams nightclub in Dundee that evening.

Another celebrity to pop into the Reform Street diner was TV presenter Andi Peters, in May 2014.

The one-time children’s TV star was in the city as part of ITV’s Good Morning Britain show and the Lorraine Kelly show, where members of the public got a chance to take part in the programme’s Wheel of Fortune game.

“He came into McDonald’s for his breakfast and cheered everyone up with his jokes and chat,” says Dave. “He had all the staff laughing.”

A crowd of around 12,000 people flocked to witness the clown character switch on the Christmas lights in City Square.

The Reform Street site was the ideal spot for a McDonald’s, being in the heart of the city centre and bustling with hungry shoppers.

Dave reckons the most obvious change since he opened the restaurant has been the range of McDonald’s products.

“The menu was much less extensive. It was mostly beef-orientated although we did sell chicken nuggets,” he says.

“We sold coffee initially but it took a good while before we started offering tea.”

The Kirkcaldy diner was next to open its golden arches in Scotland, three weeks after Dundee’s Reform Street.

“Both were planned but Dundee came to fruition ahead of Kirkcaldy,” recalls Dave.

“It was just a case of whichever site was ready first.

“Basically, the council and planning department got everything through really quickly.”

He remembers when Scotland’s rugby squad came in for their lunch during the 1991 World Cup.

“They had a game in Edinburgh and it was all the superstar players – Gavin Hastings, Scott Hastings, David Sole, Tony Stanger and Finlay Calder.

“Someone from the Scottish Rugby Union asked if they could come in to eat. Of course we said yes! McDonald’s on Princes Street was over three floors so we gave them a private area downstairs. I think they all ate Big Macs.”

Rugby fan Dave couldn’t resist asking the squad to sign a rugby ball, and it’s one of his most treasured possession to this day.

Dave, from Monikie in Angus, was working in Liverpool when McDonald’s decided to open in Scotland.

Keen to get back to his Scottish roots, he jumped at the opportunity to start up the Dundee restaurant.

After four years, he took on the franchise.

He ran the Dundee diner for 23 years before selling on the franchise in 2014.

“The Reform Street outlet has undergone a lot of changes in the 33 years since it opened but I’m proud and honoured to have been there at the start of its journey,” he reflects.

Dave still enjoys the odd Big Mac but more often than not, he heads to McDonald’s for a nicely-priced (and tasty) coffee.

The American fast food company, McDonald’s Corporation, was founded in 1940 as a restaurant operated by Richard and Maurice McDonald in San Bernardino, California.

The brothers rechristened their business as a hamburger stand, and later turned the company into a franchise, with the golden arches logo being introduced in 1953  in Arizona.

In 1955, businessman Ray Kroc joined the company as a franchise agent and purchased the chain from the McDonald brothers.

It took McDonald’s nearly 15 years to come to Scotland after first establishing itself in the UK in Woolwich in 1974.

Guatemala, Andorra and Macau became home to the Big Mac before the Scots were able to get their hands on it.

Despite months of promotion and anticipation, Dave says he wasn’t sure how the brand would be received.

“We prepped as much as possible and it was immediately after that first day of business at Reform Street that we had to draft in more staff from Blackpool and Gateshead, which were the closest branches at that time,” he recalls.

“That week was the second-best opening week McDonald’s had had in the UK.”

The drive-thru McDonald’s at Mid Craigie opened in October 1990, and this year marks the 30th anniversary of the facility.

It was opened by 76-year-old Black Watch veteran Arthur Innes.

In October 1994, athletics star Liz McColgan swapped her tracksuit for a pinny to help out for a special “McHappy Day” where 50p from every Big Mac went to charity.

The late comedian and entertainer George Duffus was only too keen to get stuck in alongside her.