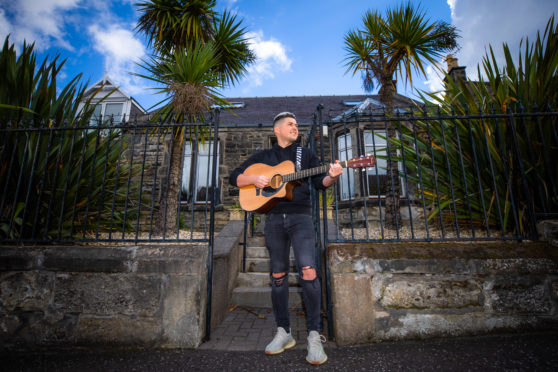 
An aspiring Fife singer, who was due to perform his first solo gig just hours after the coronavirus lockdown was imposed, is renewing his bid for stardom.

Kirkcaldy songwriter, Phil Ciarletta, has turned the disappointment into a career opportunity by getting creative during the 15 weeks stuck at home.

He has produced a raft of new material, the first of which will be released next week.

The 26-year-old senior planner for an oil and gas company, releases his first single entitled “The Sesh” on Friday, under the moniker of PJ Ciarletta.

Not content with just having one single, Phil is already working with producers on a follow up release planned for September and an EP or album, which could be ready as early as spring next year.

The Scottish-Italian born singer admits he was devastated by the cancellation of his first solo gig at the Kings Theatre in his home town but said the lockdown presented him with a unique opportunity to better his career.

“I quickly realised that having all this time at home gave me the creative freedom to build up my back catalogue of my own songs which is really important.

“I’d made the step up from singing cover versions in pubs and having your own material is crucial if you are looking to succeed.”

Phil, who started playing the guitar when he was 12 and who draws inspiration from performers including of Gerry Cinnamon, The View, Paolo Nutini and the Stone Roses said ‘Sesh’ is a song most people will be able to connect with.

“Everyone has been on a ‘sesh’ that has gone too far, right? And experienced the contributing factors, and resulting highs and lows.

“Well, they’ll get that within the song for sure.”

Phil’s immediate aim is to get the first singles on the media platforms and create a buzz with his ultimate ambition to sell out Hampden Park as a bonafide star.

The Sesh is available now from iTunes, Amazon and Google play and from all media and streaming platforms from August 28.