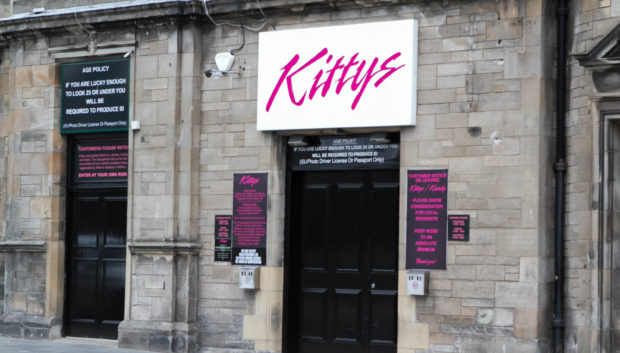 
A former soldier was facing a lengthy jail sentence yesterday after attempting to murder a doorman when he was refused entry to a nightclub.

Alan Adsley, 38, drove a van onto a pavement and struck Michael Harbison, 46, who was among staff working outside Kitty’s and the adjacent Sin venue in Kirkcaldy.

A prosecutor told jurors at the High Court in Edinburgh they might think the victim was “a very lucky man” to escape without serious injury.

Advocate depute Richard Goddard QC pointed out Adsley must have known his victim was vulnerable because he was facing away as he drove at him,

Mr Goddard told the jury Adsley had deliberately given the victim “no chance”.

Mr Harbison said that when the vehicle hit him it forced his body up before he struck the pavement and added: “I was in the air.”

Adsley, formerly of Craigearn Avenue, Kirkcaldy, had denied attempting to murder Mr Harbison on March 14 last year at Hunter Street but was found guilty of the offence on a majority verdict.

He earlier admitted that he was driving the vehicle while unfit to drive through drink.

Adsley, a roofer, had been freed on bail from sheriff courts at Kirkcaldy and Aberdeen at the time he committed the offence.

The trial judge, Lady Scott, called for a background report to be prepared before sentencing next month.

Adsley told the court he had set out only to scare his victim.

He said: “I made the biggest mistake. It was a scare tactic. I didn’t at any point intend to hurt anyone. I am so sorry for what I have done. I know I hit him but I didn’t mean to hit him,” he said.

He said after the van attack he had panicked.

Adsley accepted he had been drinking cider and vodka and downing shots before he and another man went to Kitty’s that evening.

Doorman Bryce Adamson, 53, said they tried to get into the premises but had had too much to drink and were refused entry.

He said threats were made to carry out a stabbing, rape a wife and blow up a house and during a confrontation Adsley was punched.

Adsley left the scene but minutes later mounted his attack. Adsley was remanded in custody by Lady Scott.