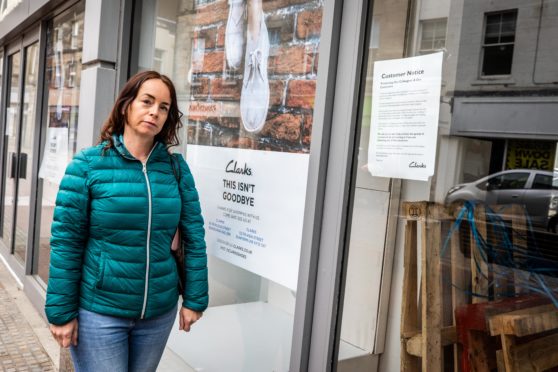 
The decline of Kirkcaldy town centre is continuing as three more major retailers announced they are closing for good.

Clarks shoe shop and jewellers H Samuel Ltd have confirmed they are pulling out of the town, as is fashion outlet Quiz, which went into administration this week.

The announcements, which came within hours of each other, are the latest in a series of devastating blows for the town centre, which include the loss of Marks and Spencer after more than 80 years as well as the closure of retailers including Tesco, BHS and Debenhams.

The decline of the High Street has been described as “grim” by Kirkcaldy Conservative Councillor Kathleen Leslie, who said the coronavirus pandemic had sped up the demise.

She said: “This news is truly devastating for the town and I fear these announcements will, unfortunately, not be the last.

‘Deep sadness’ as popular Fife clothing store will not reopen

“The town centre continues to pay the price for a catalogue of silly projects and bad ideas instigated by Fife Council, not least the decision to allow a retail park which has resulted in shoppers being attracted away from the ailing High Street.

“The impact of the continuing lockdown and the rise of online shopping have obviously also had a huge adverse effect,” she added.

“It’s terribly sad to see so many big name retailers give upon the town and as we come out of the lockdown, we need to see a concerted effort to halt Kirkcaldy’s decline be it with redevelopment and a move for more town centre living as well as support for smaller independent retailers.”

Labour Councillor Neil Crooks, convener of the town’s area committee, insisted much had been done to try to revive Kirkcaldy’s fortunes.

He said: “We’ve invested in various infrastructure projects and are currently working on other initiatives including Shop Happy and Love Our Langtoun projects that will help to boost trade in the town.”

Confirming the closure, a spokesperson for Clarks said: “We continually review all of our stores to ensure that they are the right size and located in the right areas in order to provide the best possible offering and environment to our customers.

“After careful consideration, we have decided not to renew the lease on our Kirkcaldy store, which will not reopen on June 15.”

A spokesperson for H Samuel said: “Amid this challenging pandemic and fluid business conditions, we have accelerated a previous strategy to close some stores permanently starting this month.

“We are, of course, contacting our H Samuel Kirkcaldy customers, in order to connect them with any orders or repairs that may be outstanding from the store.”

Quiz, which has 82 UK stores was placed in administration and sold to Zandra Retail Limited – a wholly-owned subsidiary of Quiz Plc. The Kirkcaldy branch is one of 11 of its stores shutting.

Tarak Ramzan, chief executive of Quiz Group, said the decision had been taken with deep sadness and regret.

Police have charged two people following an attempred robbery which targeted a teenager in Fife this weekend. Kirkcaldy – The Courier…